UPDATE 3/3/18: Bids of three contractors were accepted on April 2nd. 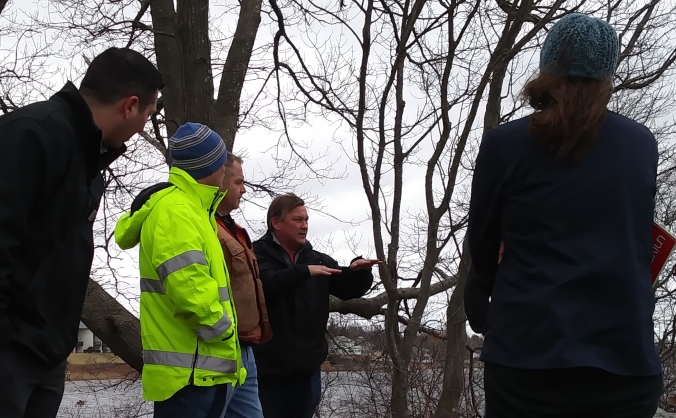 Warwick Engineers Eric Earls and Eric Hindinger briefed representatives from 14 companies interested in bidding on repair of the causeway at Salter Grove. The obligatory briefing on March 5th started in the Council Chambers at City Hall and finished on site at George B. Salter Memorial Grove.

Earls advised contractors to focus on the low-lying area near the plastic culverts and the deep cut previously crossed by a foot bridge, which he described as “treacherous” at high tide. The focus should be on providing safe access to the breakwater, with any other improvements being “gravy.”

Unusually, the Request for Proposals (RFP) specifies a budget ($200,000). The best project proposal offered within this budget will be selected.

Several contractors have expressed doubt that anything useful can be done at this price and have urged the City to request additional funding from RIDEM. The State owns Salter Grove, and RIDEM is providing funds for the causeway repair from a trail improvement grant.

No representative from RIDEM was present at the briefing, but this agency will have to weigh in on proposals which are due April 2nd. According to Earls the “drop dead” date for completion of the project is December 31st, 2018.

Citing a lack of expertise on the City’s side, Earls explained that the RFP was for a design-build project that included permitting.

Contractors had questions about whether it was necessary to maintain tidal exchange across the causeway and what was the desired life expectancy of the repairs. Earls said that these and other questions submitted by contractors by the end of the week would be addressed in an addendum to be sent out on Monday, March 12th.